An unmissable tour when visiting Selva Val Gardena is the famous Wolkenstein Castle, erected in the XIII century.
The castle is characterized by its singular location: it was built into the dolomitic rock, 1600 meters above the sea.

Initially, the castle was property of Heinrich von Kastelruth and it was partially destroyed by a venetian attack in 1525. Later it was damaged again by the fall of some boulders, and since then the castle was never rebuilt.

The ruins currently belong to an heir of the Wolkenstein family.  The castle has in fact been named after them.
It is still possible to admire its original triangular map, surrounded by some of the original walls, and the courtyard, as well as some fresco traces on the walls.

Hiking to the ruins

The peculiar and evocative location of the castle, united to the breath-taking panorama, have made this place an unmissable stop when staying in Val Gardena.
Reaching the ruins is not difficult at all: starting by Selva Val Gardena, you have to take the steep path that goes above Centro Addestramento Carabinieri. Ten minutes hiking are enough to  reach the castle and its view.
This trip is enjoyable in every season of the year, but it is especially during summer that it becomes unforgettable, since the surrounding view changes and colorize.

Tradition says Oswald von Wolkenstein, a famous poet and composer during the Middle Ages, was hosted here for a few summers.
Von Wolkenstein, born between 1376 and 1387 in Alto Adige and died in 1445 in Mirano, was a great explorer who always looked for new adventures. 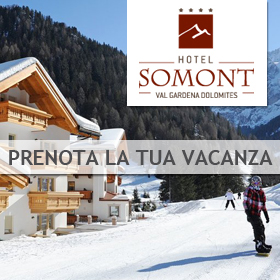